As part of the Northeast/New England RPM Meet in Collinsville, CT there are a number of tours available to participants. This year I went to Palmer, MA for the Mass Central Railroad’s open house. Lighting was a little tough since we was there at high noon on a gorgeous June 1st, but I did my best to get a few shots of the equipment and facility END_OF_DOCUMENT_TOKEN_TO_BE_REPLACED

It’s been awhile since I’ve posted any trackside shots.  I’ve been getting out though when I can.  Here are a few from New England in 2012 and 2013 that I haven’t shared yet. END_OF_DOCUMENT_TOKEN_TO_BE_REPLACED 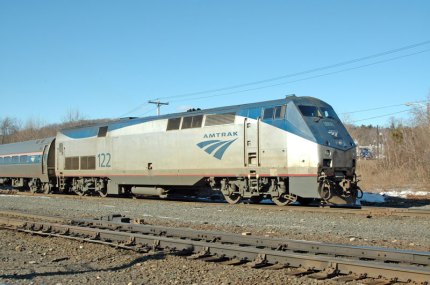 The southbound Vermonter crawls into Palmer behind GE P42 #122 on Presidents Day 2009.

For the second year in a row, Tom and I spent Presidents Day at Palmer. Once again the action didn’t dissapoint, plus the weather was considerably better than the year before. While the morning was pretty dead, and we ended up spending most of the time hunting for lunch, the afternoon was much much more fruitful with numerous appearances by Amtrak and CSX, a couple of NECR trains and at the last possible second Mass Central or Finger Lakes or whatever it is that they are. END_OF_DOCUMENT_TOKEN_TO_BE_REPLACED