After all the planning in the last two updates I can finally share some actual work.  As of this writing the basement is around 75% complete but I’ve already got too many photos for a single post.  So this month we’ll start at the beginning and work up to the point where I was able to move into the workshop.  Next month we’ll go over the fit-out of said workshop and the month after that we’ll finish everything up in the layout area.

When Beth and I first moved into the house, the basement was a rather gloomy space.  Someone had clearly put a little effort into it back in the 70’s or 80’s and then promptly ignored it for the next 3 decades. Here’s what it looked like the day we moved in:

On the plus side, it clearly didn’t have any moisture issues with not a hint of mold or mildew despite all the crap the previous owners had crammed down there.  Structurally the walls were in good shape and only the hatch door and the windows needed replacing. It wasn’t as big of a space as I wanted but it seemed like it would do for the time being.  Ultimately I concluded that with a bit of work, it would do.

Before much else could happen the partition wall in the layout area had to come down. One afternoon later and I could finally get a sense for how much (or little) space I had to work with. 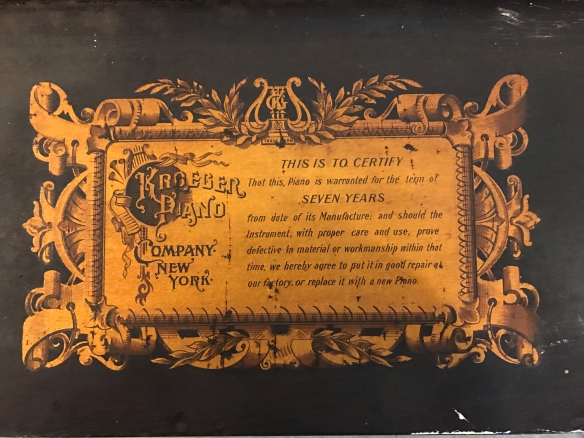 Apparently part of that partition was made out of an old piano. I’m going to assume the warranty isn’t good anymore.

Next I went around the entire perimeter and removed the old cracked parging from on top of the block walls and recapped them with foam insulation.  At the same time I insulated the rim joists and ran a new dryer exhaust pipe (there’s a legit cap on that cleanout now).

In a few places the parging on the walls was crumbling and in this spot a couple of the blocks had been smashed in.  I repaired that hole and skimmed over the missing parging.

The washer and dryer weren’t next to each other and were separated by the sink.  It was an awkward configuration so everything was moved.  I sealed the wall with two coats of DryLok prior to everything being rearranged. 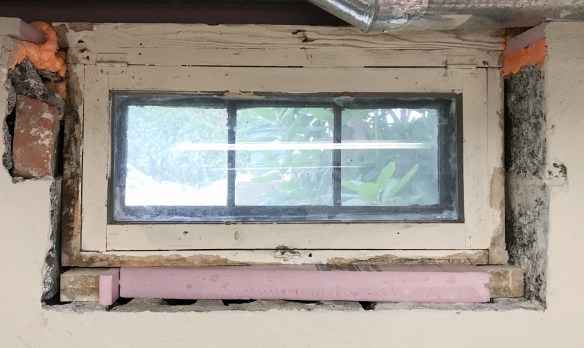 With the laundry area sorted I returned to sealing up the basement by replacing these old wood windows. They had storms and weren’t really that drafty (except around the frame), but they were rotting and couldn’t be opened and they really needed to go. That bit of wall desperately needed to be fixed as well. 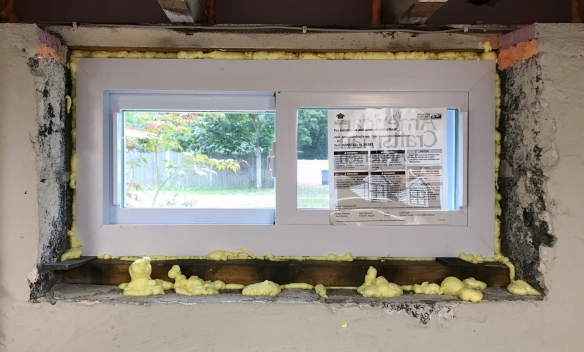 There were 6 windows to replace and some vinyl sliders from Home Depot did the job beautifully. The blocks under the windows were filled with concrete and a new pressure treated sill was anchored down.  Then the windows were attached on all sides and expanding foam insulation was sprayed into every gap. I re-parged the exterior and will put trim around the interior.

A lot of the wiring was quite old and there wasn’t enough capacity so most of that was replaced. This let me add a considerable amount of  lighting in the basement and wire it properly to switches. Should be good for another 50 years. Much of the original copper plumbing was replaced with Pex too.  I didn’t take many photos of this process but it was definitely well worth doing.

With the utility and repair work completed it was time to put up new walls.  I wanted to create a partition that would separate the workshop from the stairs/layout area and the utility room. These stud walls were assembled on the ground and, in the case of the panel against the stairs, sheetrock was attached to the back side to avoid having to do it once the wall was stood up and the stairs were in the way.

Sheetrock attached, mudded, sanded, primed and painted. Notice how much better the lighting is with that used-but-new-to-me T12 fixture running LED tubes. Someday I’ll swap it out with a legit LED fixture but for the time being the price (free) was too good to pass up. 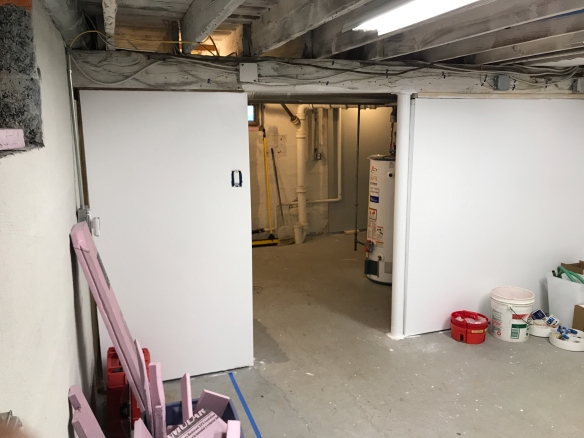 The short wall hides the washer and dryer from my workbench while still leaving a large opening to carry laundry baskets through. Once the layout is done this will also be the path for anything that needs to get into the workshop via the hatch to the outside, which is at the back. 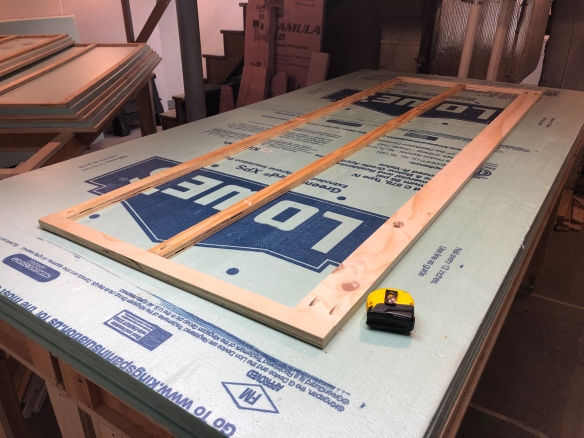 Next a couple of friends and I started assembling the panelized wall system that will go around the perimeter of the basement.  Each panel consists of two 3/4″ plywood frames sandwiching a piece of 1 inch foam.  Additional pieces of 3/4″ foam were filled in between the plywood on the surface facing into the room.  A sheet of 1/2″ sheetrock was screwed to the top of that.

Here we see a stack of partially completed panels waiting on sheetrock.  The front frame, the insulation and the rear frame are all offset by an inch on each side so that the panels will lock together.

Before putting the panels up I painted along the edge of each wall.  That sealed everything up a bit more and meant I wouldn’t need to mask the panels when painting the floor.

2×4’s with a 1/2″ plywood backstop screwed to them were anchored to the concrete floor.  This created a stable, level surface for the panels to rest on.  The inconsistency in the floor required that quite a bit of material had to be hogged off of a few of the 2×4’s.

Here’s the workshop with all panels up.

And here’s the layout area. Each vertical sheetrock edge has a piece of j-channel to protect it.

With the panels up and the screw holes filled and sanded I applied a coat of primer and two coats of satin white.

Next I began working on the trim.  Here I’m assembling one of the basement window casings.

The trim along the ceiling proved to be relatively straightforward, but the baseboard was anything but. In order to account for the inconsistency in the floor I had to scribe and cut all the base boards to match. Here’s the process I used.

1) I drew a line 3.75″ up (the height of the pine boards I was using) from the lowest place on the floor and tapped in some nails every few feet along this line.
2) I placed each board on the nails.
3) using a compass set to 3.75″ I scribed the profile of the floor to each board.
4) I used my jigsaw to cut along the line I had drawn.  I angled the blade so that only the very edge of the board would need to be the correct profile.

Once all the boards were cut I spent a lot of time sanding.

Then everything got a coat of primer.

Good thing I had the layout bench work at my disposal…

Before attaching the trim I capped the ends of the wall panels with some pine boards that were scribed to the wall. 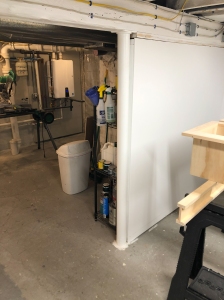 This lally column was annoying me.

So I built a box to go around it.

Before installing the window trim I insulated everywhere I could. 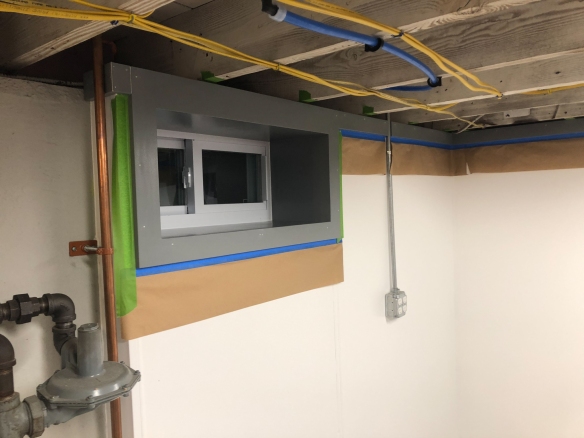 With a coat of paint applied to the trim I got out my finish nailer and tacked everything in place.  Then I filled the nail holes, caulked where necessary and gave everything a second coat of paint. 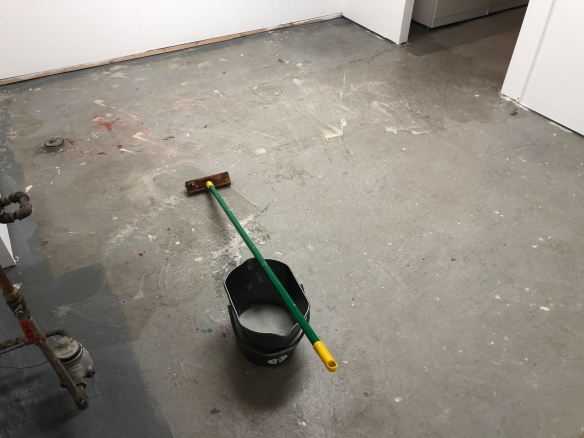 Before I put the baseboard trim on I wanted to paint the floor.  A considerable amount of cleaning was required before I could do this though.

Then I put down a first coat of some old paint I had kicking around, just so I could use it up.

Once the final coat was down and had cured for a couple of days I got to work attaching the baseboard.  I had Home Depot match the color of the epoxy floor paint so that I could paint the trim the same shade but with proper non-epoxy paint (cheaper and better for vertical surfaces). 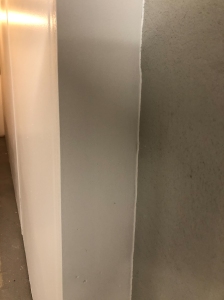 I caulked all the gaps including those running up the walls.

And also along the floor.

At this point the workshop was complete.

That covers the major construction.  The layout space will be similar but I also have the stairs to do and the door to the hatchway so there’s still a lot to do.  I’ll cover that in a couple of months.  Next time I’ll show you how I built shelves and workbenches for the workshop plus getting all my modeling stuff set up.

6 thoughts on “Building a Model Railroad – Part 3: Renovating the basement.”