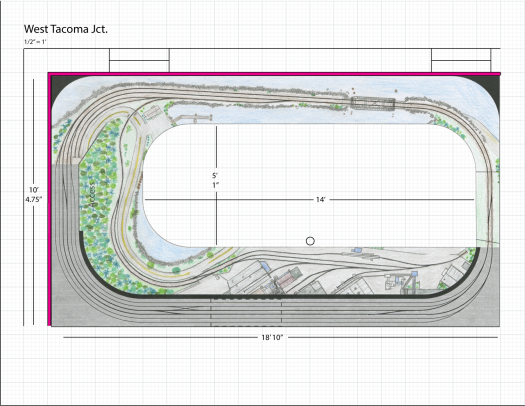 Last month I started what I hope will be a monthly series on the construction of my layout.  Knowing my penchant for procrastination and the ease with which best laid plans are upset by life and other obligations,  I made sure that I had enough material to cover at least the first few months of posts.  So here’s the track plan, right on schedule.

The layout is a straightforward loop of track around an open space for operators.  A swing out section will allow access. About half of the loop is scenicked and the other half contains a staging yard with two main and four storage tracks.  Five trains in all can be accommodated as one of the storage tracks has a double crossover in the middle and will be designated for a short UP local and my Amtrak Cascadia/Mt. Adams (Talgo) set.

The staging yard is separated from the scenicked part of the layout by a backdrop. On the other side is the Rainy River newsprint plant at Chambers Creek.  A short branch runs to a junction with the main at what the railroad calls “West Tacoma” where a small interchange yard is maintained.  A pair of green and white GE 50 Tonners will shuttle cars between the mill and the yard which is served by a UP or BN local.

The rest of the layout is comprised of a long causeway that separates Puget Sound from Chambers Creek and leads to Bridge 14.  Also modeled will be a single crossover at Pioneer on top of the swing-out entryway.

Steilacoom is a place I’ve been visiting my entire life and it’s not going to feel right if things aren’t in their proper places.  Obviously I had to make some concessions to fit real world shapes into a rectangle but while a good deal of compromise was required to compress everything down to size I was able to keep all the structures in their correct locations and mostly followed the prototype track arrangement (with one or two small exceptions).

Since I currently live on the other side of the country, not to mention 23 years after my modeling era, I lucked out when I found the Washington State Department of Ecology’s Shoreline Photo Viewer. There I was able to view aerial images of the entire Washington State coastline captured between 1976 and 2017. While it was fun to see early photos from the 70’s, the most useful ones for me were taken between 1992 and 1997.  Below are three from that time period that show the entire area featured on my layout:

Making it all Fit

Armed with the photos above and a good deal of other historical information, I set to work thinking about what I could realistically feature in the space available to me.  I had already nixed the entire town of Steilacoom in favor of the operational interest afforded by the mill but how much of the main line would I be able to include?

Not much as it turns out.  With 89′ cars being common on this line and a deep dislike of the unsightly way those cars lurch around curves with too short of a radius, about half the layout just ends up being the broad sweeping curves that lead into and out of staging.  I knew I had to model Bridge 14 and had to do it properly with the long unobstructed causeway leading up to it from the south.  That meant the interchange yard couldn’t start until very close to the point where the main was curving back into staging.

Ultimately the topography of the area worked in my favor.  While operating or viewing the layout, people will be standing where Chambers Creek would be. On the prototype the yard isn’t visible from there as it’s well hidden by the southern rim of the gulch carved out by the creek.  This meant that I could curve the yard tightly out of sight towards staging and it wouldn’t be visible unless someone really tried to look at it. The curve is plenty broad enough for operations but looks a little odd.

With the main figured out I set to work on the branch and mill trackage.

First I took a current day Google Earth screenshot (to take advantage of the top-down perspective and high resolution) and using a number of sources, traced out the main, branch and mill trackage. 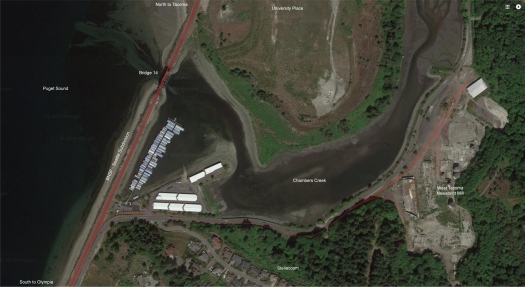 With all the track located it was easy to see how I could curve the branch around and place the mill on the opposite side of the backdrop from the staging yard.  I was even able to include all but one of the mill tracks (I eliminated that first spur that curves along the tree line).  I’m pretty sure this track was only occasionally used to bring machinery in and out of the plant though and shouldn’t really be necessary for regular operations.

The main concession I was forced into was where the branch meets the main.  In the real world the branch curves to the south and cuts in to the approach track for the yard right after the turnout onto the main.  Unfortunately due to the proximity to the basement wall, I had to curve the branch to the north which also meant extending the yard approach track well out into the causeway. I think this looks fine but operationally it’s going to mean performing switching tasks a bit differently from the way they were done in real life.

Here, again, is the track plan with various features and landmarks labeled so they can be correlated with the Google Earth image above: 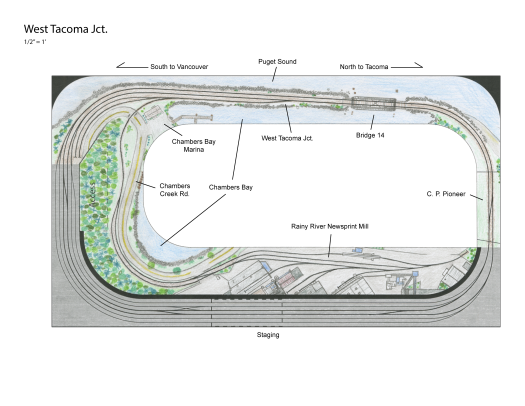 You’ll have to excuse the quick and dirty scenery that I sketched in with colored pencils. Doing that part by hand just seemed easier.  Of note, the heavily forested area on the left of the plan represents the steep hill on the south side of Chambers Creek.  It will be tall enough to hide the staging tracks and the end of the interchange yard from operators but I designed part of it to lift out for maintenance and to ensure that I never have a wreck in that area 🙂

I designed the layout in Adobe Illustrator using the Trackplan Tools plugin developed by Rick Johnson (unfortunately the latest version of AI that it’s compatible with is CS5).  This allowed me to create turnouts in all the common sizes but didn’t let me spec them out to a particular manufacturer. Since Illustrator isn’t as precise as a CAD tool, I decided that before proceeding further I would lay the entire plan out full size in the basement and test fit the various turnouts I planned to use.  A bit surprisingly, everything fit!  Unfortunately I don’t seem to have taken any photos of that process, but once I was done I went back to my track plan and labeled everything: 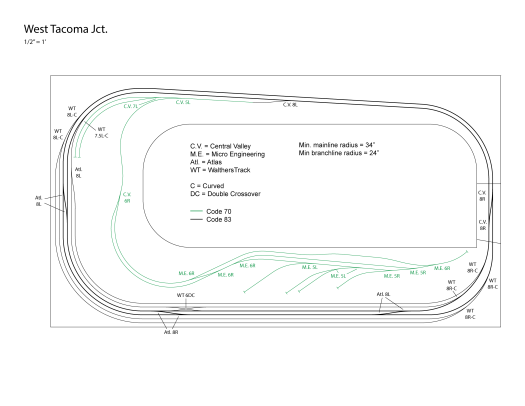 I saved the sheets of kraft paper upon which I drew the full size plan and will eventually use those to trace out the track center-lines on the sub-roadbed.  I highly recommend taking this approach as it answered some nagging questions about the feasibility of my design, uncovered a couple of small issues and helped a lot when I planned out the benchwork.

Now that I knew the footprint and track plan, it was time to start thinking about the benchwork.  I’ll talk more about the actual benchwork design and construction in the future, but for now, here’s an overview: 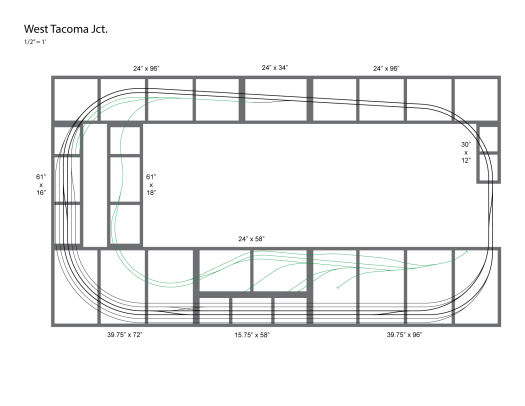 The structure of the layout is comprised of four large tables at either corner with smaller modules bridging the space between them.  Everything is build out of custom fabricated 4″ thick plywood I-beams.  It may look like there are some cross braces located exactly where turnout motors will go but in each case I can either move the brace or move the turnout far enough to provide the necessary clearance for a Tortoise.  I checked all of this on my full size plan before cutting any lumber.

At the time of this writing, the benchwork is actually 90% complete and was test-assembled in the basement to check that everything would fit. Once I was satisfied it was disassembled and the four main tables were put to use as workbenches for the ongoing basement renovations.  The tables are incredibly strong with a minimal number of legs.  They’ll easily support the weight of most grown adults but are light enough to move around by myself.

While I was doing my research and designing the layout I was also hard at work renovating the basement. I’d been slowly picking away at the numerous things that needed to be fixed since we bought the house in 2016 but it wasn’t until last spring that the renovations of the layout area really kicked into gear.  Next month we’ll take a look at that process.