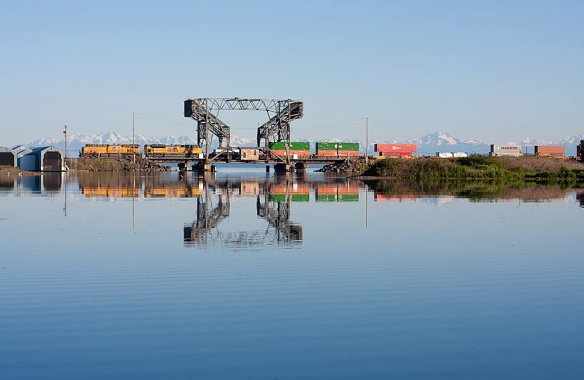 UP K-SEMN rolls south across Bridge 14 at Steilacoom, WA. Photo by Robert Scott.  Used with permission.

Well another year has come and gone with very few posts from me. But after three long years 2020 looks to be the point where I can finally begin to put time and money into building a layout. In fact, the benchwork is 90% complete though at the moment it’s not in its correct configuration and is serving as a series of work tables for the last bit of construction in the basement. If everything goes to plan I’m hoping to have the prep work done and be hanging the backdrop and valance over the next couple weeks. In the meantime I thought it might be worthwhile to fill you in on my plans.

The layout will be set in the spring of 1997 and will feature BNSF’s Seattle Subdivision in Steilacoom, WA, a small town on the south Puget Sound near Tacoma. Specifically, I’ll be focusing on the area that the railroad calls “West Tacoma.” This includes Bridge 14, the unique (and probably very difficult to model) Straus Direct-lift bridge, and the large Rainy River newsprint mill which owned a pair of GE 50 Tonners and operated a small branch from the plant to the mainline. 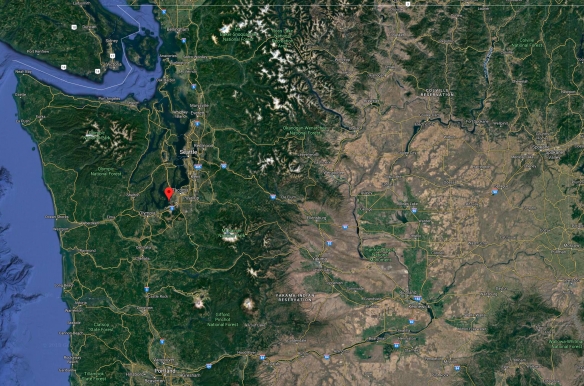 The year was chosen because it would let me run the widest assortment of motive power and rolling stock. In 1997 the BNSF still looked mostly like BN, except for the Heritage 1 C44-9W’s and the occasional Santa Fe unit. Lots of cascade green and LMX units were leading most trains. On the UP, SD60M’s and C40-8’s (two of my favorite locomotives) dominated the head end of just about everything yet SD40-2’s were still commonplace and SP power would show up occasionally. Amtrak was running a nice mix of F40’s, P40’s and the occasional Dash 8-32BWH.

1997 also saw a wide assortment of trains on the sub. I can model early garbage trains behind 4-axle GP units, lots of manifests, a decent number of both domestic and international TOFC and COFC trains, solid blocks of autoracks, baretables and both grain and potash unit trains. On the passenger side there was the long-distance Coast Starlight as well as the “Cascadia” (pre-”Cascades”, running the original Talgo Pendular cars) and the Mount Adams (Superliner equipped).

A southbound UP manifest passes the now defunct interchange with the paper mill on April 22, 2005.  Photo by Lauren Scrafford. Used with permission.

I picked mid-late Spring, or maybe early Summer, because the backdrop will feature a long panorama of south Puget Sound and the Olympic Mountain Range and I want there to be some snow on the tallest peaks (they look best that way) but I don’t want to model January or February because I’d like to be able to head down to the basement at that time of year and not be reminded that I’m actually living through the bitter reality of a New England winter.

But what about the Seattle & North Coast?!

Most of you have probably seen my model of SNCT F7 #101 and a few may have seen the presentation I did on the SNCT at the New England/Northeast RPM meet some years back. I did actually come up with a track plan for an SNCT based layout but after thinking it over for awhile I kept coming back to the fact that I wasn’t around to experience the SNCT and while I find it fascinating, it is somewhat limiting when I think about everything else I could be modeling. Regardless, I still have plans to build the complete roster of SNCT locomotives and a good stable of appropriate rolling stock. I wouldn’t discount the possibility that such a layout will exist in a future house with more space.

Despite finally having a basement, there are still some space issues I have to contend with. The first is that the area I have available for the layout is no larger than 12’ x 19’ and at one end of the room I only have 11’ due to the inconvenient placement of the exterior hatchway door. The space is also challenged vertically so there’s no room for a drop ceiling. The area of the layout adjacent to the furnace will necessitate a removable section so that technicians can gain access for service calls.

My choice of era and prototype dictates that I will be running long cars so broad curves will be required both for smooth running and a good appearance. Steilacoom as a location is somewhat problematic because it’s on the water and any grade has to be hidden. Realistically looping the mainline up and over itself to gain more running room or put the staging yard under the layout is pretty much impossible in the footprint I have to work with. Because of those broad curves the layout will need to hug the walls, which means people will stand in the middle. Sadly that’s going to require a lift out section or duck under.

The final issue to contend with is the fact that the prototype track arrangement doesn’t fit in a rectangle terribly well, especially when adequate people space is brought into the mix. I have some ideas to get everything where I want it, but implementing them is going to involve turning certain conventions on their head. We’ll see how that goes.

A northbound UP intermodal train rolls along Puget Sound.

Stuff I have to have

Of primary importance to me is the a staging yard. Since the layout is just one scene that a parade of trains will run through I’ll need a lot of trains and they’ll all need somewhere to live that’s out of sight. Furthermore, the staging tracks will preferably be longer than the scenic part of the layout since I want the locomotives on long freights to disappear before the last car appears. This is in keeping with the tight viewing area of the prototype but also allows me to hide the fact that my mile long trains really only have 20 or so cars in them.

I also want the scenery to be just as well rendered as the locomotives and rolling stock. The experience of standing in the middle of the layout should be as immersive as possible, even without any rail action. This is going to mean some very large water areas, tall hills and large structures. It’ll also mean leaving out some scenes I’d like to model and cleverly hiding some trackage I can’t do without.

Regarding crossovers: Steilacoom proper doesn’t have a single one anymore. There’s a set to the north at Pioneer though. If at all possible I’d like to move these south, closer to the bridge so that I can model them in full detail.

The layout also needs to be manageable for one person. I’d like to have a couple people over now and then to run trains but I know that 90% of the time it’s going to be me, in the evening, decompressing after work with a cup of coffee while I watch trains roll by.

One of two Boise Cascade GE 50 Tonners based at the West Tacoma Newsprint mill hauls a woodchip car from the small yard used to interchange cars with BNSF or UP. Photo by Dave Houston.  Used with permission.

With winter hard upon us and most of my outdoor chores finished I’m hoping to make a lot of progress over the next few months. In February I’ll share the track plan and in March you’ll get look at the completed workshop and layout space. Hopefully updates will continue on a monthly basis.

Thanks for reading, until next time,