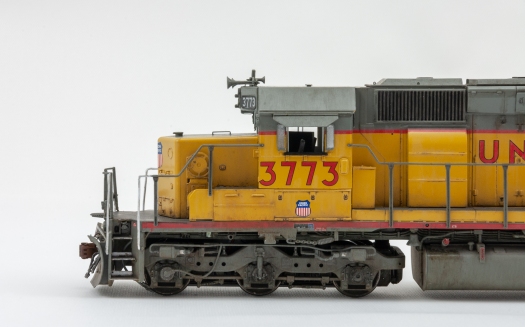 I think it’s reasonable to argue that the SD40-2 was the defining example of 2nd generation diesel locomotives in North America. They were purchased in huge numbers by most Class 1 railroads and have developed a reputation for reliability over decades of operation.  Today they’re less common on Class 1’s, but many are being rebuilt to extend their lives and quite a few are well into second careers on regional and short lines.  It has therefore been rather unfortunate that HO scale modelers have never had a really good plastic model of the SD40-2 (I’d argue that there’s never been a really good brass model either, because, well.  Brass.)  Many companies have made an attempt at the SD40-2, but most have gotten stuff wrong (Athearn, Intermountain) and no one has made a stab at the huge amount of variations that occurred over the twelve year production run (Kato).  Athearn could and should have put an SD40-2 in their Genesis line to go along with the GP models they’ve been releasing but they never did.

Therefore, it was no small thing when I cam home from work about a year ago to find a box from Scale Trains sitting on the stoop.  Inside, I hoped, was the SD40-2 so many of us have been waiting for.

A brief glance showed a pretty nice model albeit one clearly designed for the RTR market. The shell is well rendered and the proportions are correct. However some of the engineering is questionable, the parts were not properly cleaned up after being removed from the sprues and many of the details were installed poorly.  These aren’t deal-breakers, but they are frustrating.

Overall, the level of detail is impressive.  It’s just really unfortunate that everything has to come preinstalled as opposed to on a sprue or in bags.  I don’t think the blame for this lies with Scale Trains though.  I’d point to the laziness of the RTR crowd that gets bent out of shape when they have to press fit a part into a pre-drilled hole.  Even worse than the fact that the parts are  preinstalled is the fact that they’re almost all copiously glued into place. Because god forbid anything fall off in shipping.

The fit of the major components was a little wonky as well.  Something about the frame rail detail part causes it to look like it bows up. Extensive cleanup of flash and excess paint on both the plastic and metal frame components didn’t make it look much better.  The fuel tank also needed some work to get it to seat into the frame weight properly, some of the steps were crooked and the shell itself has an overly tight fit on the frame. I should point out here that for the most part I was able to fix these issues with a minimal amount of work and basic tools and skills but I’d rather I hadn’t needed to.

On the positive side of things, the paint is excellent.  It does in fact match Tru-Color Armor Yellow and Harbor Mist Gray.  The lettering is crisp and accurate. Best of all the paint strips easily with 91% alcohol and the lettering can be removed with the paper-towel-soaked-in-Solvaset trick, without disturbing the underlying paint.

As an early release from a very young company I think Scale Trains did a reasonable job on these.  More importantly I’ve found them to be happy to hear from customers and  incredibly receptive to feedback . As the two additional SD40-2’s I purchased from the second run have shown, they’re willing to make the necessary changes to improve quality control and fix design issues. If you want to buy an accurate model of an SD40-2 Scale Trains offering is the only choice worth considering.

I purchased a model of Union Pacific 3773 which was built in Oct. 1980 as part of EMD order 796345 for 40 units to become UP series 3769-3808.  According to Brian Bennett’s meticulously researched spreadsheet of SD40-2 phase variations: http://www.contrailroads.com/sd402phases/ (scroll to the bottom and download the actual database.  It’s an amazing piece of research) this is a phase IIIb2 unit.  Phase III units were built between Dec. 1979 and Dec. 1981 and saw the introduction of (among many smaller details) exhaust silencers (phase IIIa), Q-fans (phase IIIb1), and a strengthening rib across the middle of the battery box doors (phase IIIb2). These are in addition to changes that became standard in earlier phases such as corrugated radiator grills (phase 1b1 or 1c1 depending on whether the unit was UP or BN), clean cab/88″ nose (phase IIa1), etc.

Specific spotting features of this series include brake wheels instead of brake levers, extended range dynamic brakes (visible as an additional bulge around the exhaust silencer) and, as built, a beacon, class lights and silver trucks.  3773 did eventually get a waste oil reclamation tank cut in to the right rear of the fuel tank (http://www.rrpicturearchives.net/showPicture.aspx?id=3523941).  These were generally added during the UP’s SD40-2R Life Extension Program but that ended in 1999 without 3773 having been upgraded (See here for more info: http://utahrails.net/articles/sd40-2r.php).  I think it’s most likely that the waste tank was added after the LEP program ended. Since that was after my era I left it off.

Union Pacific’s SD40-2 fleet went through a number of changes over the years.  In order to make it accurate for my summer of 1997 era I did the following: 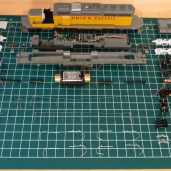 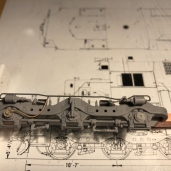 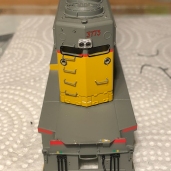 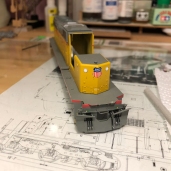 I didn’t strip and repaint the entire model.  My goal with this project was to see if I could do a decent job updating it while still saving most of the paint.  Where I did strip paint (mostly on the underframe components) I grit-blasted and primed with Mr. Surfacer 1500 Black prior to applying the appropriate TCP color in lots of thin layers.  Painting like this made it pretty easy to get a very close match to the factory paint and any variation was covered up by weathering. 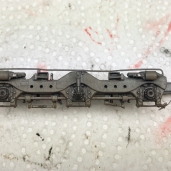 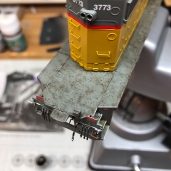 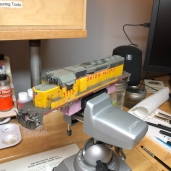 Overall I’m pretty happy with what I was able to accomplish with this model.  There are a few things I’ll probably do different next time like replace the front MU hoses, that don’t hang properly over the plow, with brass ones and the molded chains with real chain.  I’ll also probably touch up some of the weathering and add more pigments once I have a layout and I’ll be able to keep handling to a minimum.  For now though, I’m calling it done.

I recently built a decent studio photography setup that’s a big improvement over what I was using (just my bench lighting) and I think I was able to get some halfway decent shots to showcase this model.  Click on the thumbnails for bigger photos and click the photo again for full size.  You’ll be able to see all my little screw-ups better than I can see them in person!

Enjoy and please let me know what you think. I’m always open to suggestions that I can apply to my next project. 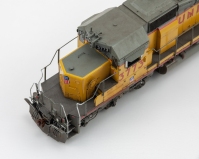