More progress has been made on BN 2154, not as much as I’d like, but since I’m taking my time and trying to determine the best assembly method for this stuff, a little delay won’t hurt. 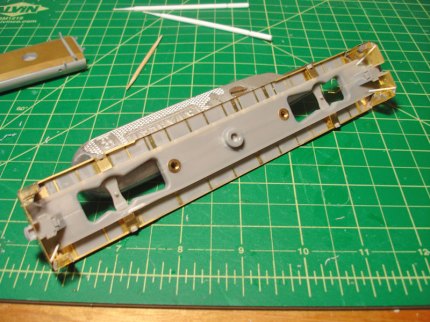 One thing I was very excited to receive was a set of GP underframe bracing (The SD variant should be forthcoming shortly). The bracing is prototypical, and helps line up a number of the underframe detail components, such as the air tanks and salem filters. The bracing is segmented to fit around the jack pad supports and is marked so that it can be trimmed to fit various styles of step wells. Assembly involves nothing more than brushing with barge, setting in place and rewetting with a bit of MEK to move the barge around and fill in any gaps. Afterwards a little filing is necessary around the edges so that the side sill will fit squarely against the walkway. 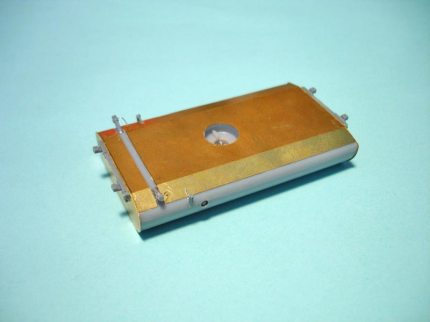 I spent a very enjoyable hour or so attaching the various C&C fuel tank details to the Railflyer tank. They really bring the tank to life. I modified the fuel fillers with bits of .008” wire to simulate the hoses that curve from the end of the filler back into the tank. I’m not sure what exactly these hoses do, but they look cool and are visible, so I felt it was necessary to add them. 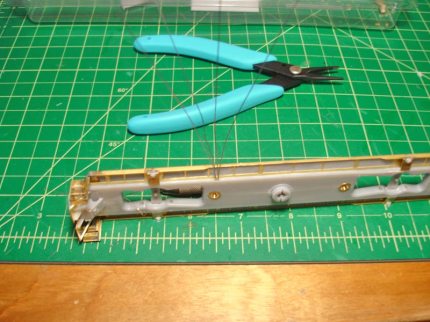 The TMC installations came next. First thing I did was to ream out the pillow blocks wit ha #77 bit, so as to remove the slight ridge created by the double sided etching process. I then drilled a large hole (Can’t remember the exact size, but smaller than a TMC circle) in each side of the frame, just in front of the fuel tank, and glued two circles on top. The next step differed somewhat for each side as I was trying to determine the best method. On the conductors side, as the photo’s here show, I glued four precut lengths of solder to each hole in the circle. I then inserted each pillow block one by one onto the solder. 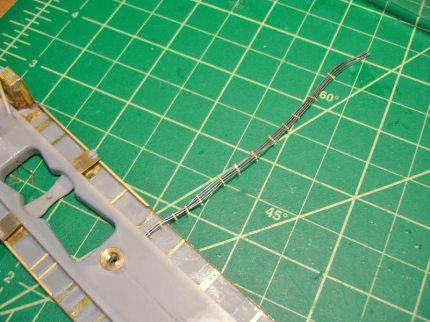 Once I had placed all the pillow blocks on the solder, I drilled a #80 hole in the frame at each PB location. I then put a dab of MEK/Barge on each hole, and inserted each PB. I found though, that it became very difficult to do this once a few blocks had been attached as the frame lip, and subsequent PB blocks tended to get in the way. Next time I will try applying the adhesive with a needle syringe, hopefully that will make things easier.

The completed TM cabling on the engineers side.

On the engineers side, I changed my process somewhat. This time I attached each of the pillow blocks seperately, and threaded the solder through them one at a time, using needlenoze tweezers. This worked ok, until I got to the PB that is mounted on a diagonal brace directly in front of the air tank. This causes the cabling to arc out away from the frame. The solder went through ok, but did not like bending back to go through the next PB as it tended to get snagged and kinked as it had to reverse direction slightly. Leaving this brace unattached until after the solder has been threaded might solve the problem. 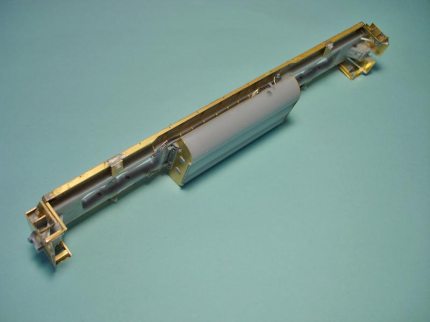 Ultimately, I think the TM cabling and other details went together quite well for a first attempt. There are a couple of nicks and kinks in the solder, but nothing a little paint won’t hide. My prototype doesn’t utilize the hanger brackets along the front truck on the engineers side, so I didn’t get to use those parts. After viewing photo’s and speaking with Christopher, it doesn’t sound like cabling on this area of the locomotive is common on BN/ATSF/BNSF units, but don’t treat that as gospel… EMD isn’t exactly known for building everything alike. 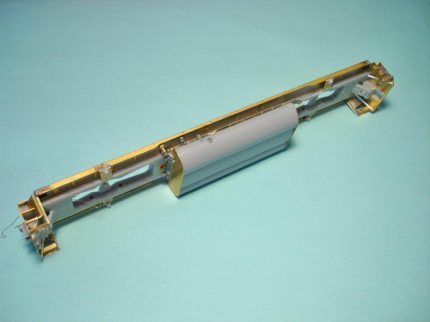 Overall, the realism delivered by Railflyers detail line is completely unmatched, and I’m continually impressed by how well it all goes together with a little time and patience. It’s not just for walkway modules either, the TM cabling, among other things will work well on Athearn, Atlas and Kato units as well.