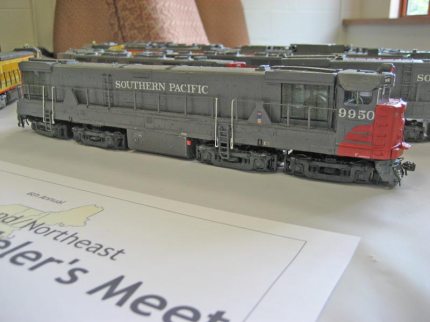 Well, it seems to have taken a lot longer to post than I had planned. Most of these photo’s are therefor probably a little dated, oh well. This isn’t nearly everything, just what really stood out for me. If you want all the photo’s from this year and the last few years, go here: http://www.neprototypemeet.com

More of Alex’s large UP and SP power.

These were probably the most impressive models I’ve seen in a long time, and Alex had over a dozen of them on display. All the U50’s are kitbashed from various manufacturers GE hood sections as well as a number of entirely scratchbuilt parts (including the frames and span bolsters). He also gave a clinic on how he went about building them. I don’t know much about the turbines or DD35/40’s, but I believe they are all plastic, built using similar construction techniques to the U50’s.

An overall shot of all the models Alex brought with him.

You can’t really tell from the photo’s, but the turbine B unit has the turbine inside it. If you ever have a chance to see Alex’s clinic, I’d recommend it. His techniques are well thought out, and the models he’s built are really spectacular. 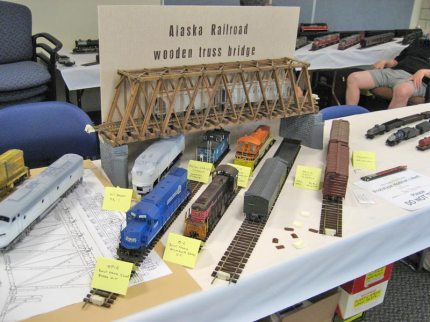 I unfortunately didn’t pay enough attention to this bridge, but I discovered after the show, while talking with some other attendees, that Ben didn’t use any glue, it’s actually held together in the same manner as the prototype. It’s also a shoe-in for the SNCT’s Dungeness River bridge.

Eric had this locomotive on display last year when it only had a paper mock up of the cab. This year he’d replaced that with styrene. The paper cab is visible in the background. This started as a Bachman model, but there’s not much Bachman left.

A close up of the scratchbuilt cab on Eric’s consolidation.

Though Eric’s modeling is outside of my era, I find it to be pretty interesting since he models the Milwaukee Railroads Morton, WA branch. I’ve been through the area traversed by that line many times, for high school track meets in Eatonvilee and family trips to Mt. Rainier. Eric also had a number of Gondola’s filled with lumber loads that I didn’t ask about, but I assume were mostly scratchbuilt. 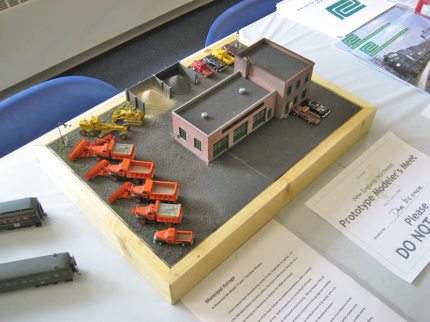 This garage was pretty neat. I especially liked all the plow trucks, I’m not sure if they were kits, or kitbashed/scratchbuilt, either way though they’re very well done.

Jim’s U18B had a lot of detail added to the frame, I especially like the brake lines. He had a number of soon to be SCL GE power that he was working on, as well as a few pieces of power that Jim Six built.

This structure reminded me a lot of the sort of houses I see all over New England. It tends to ramble around it’s baseboard displaying the different building styles of various owners who have added to it over the years. Paul did an excellent job capture the feel of such a place. 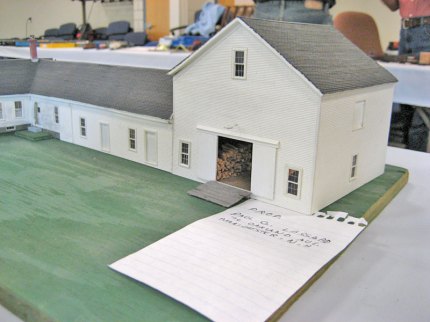 There’s ea stack of firewood right inside the barn door.

An absolutely amazing weathering job, unfortunately, I don’t know who did it.

This took me by surprise on Saturday. There’s a prorotype photo directly below the model, that you can’t really see in my image, however, were you there in person, you’d see that the model is weathered and tagged exactly like the prototype. Every tag and bit of dirt is modeled. in exactly the correct location. If anyone knows who’s work this is, please let me know so that I can give them credit.

Overall, I’d have to say I really enjoyed the show this year. There were fewer people and fewer models than last year, but the quality of the modeling on display and being demonstrated in the clinics was exceptional. I managed to eat lunch twice at LaSalle’s, dinner twice at Margaritas and breakfast once at The Village Cafe so gastronomically it was a pretty fulfilling weekend as well. I only attended two clinics, Rick Abramsons on Electric Locomotives and Alex Conta’s on GE U50s, but they were both well worth the time, despite the fact that Rick seemed to mention every electric locomotive except the Milwaukees box cabs and Little Joe’s. Anyway, it’s back to modeling now. I’ve got a lot of stuff to finish up before next years meet.