Well, I’ve finally reached a stage on the first of my two Railflyer walkway modules where there’s not much more I can do until the rest of my order arrives. It didn’t actually take that long, but I was working on my F unit as well. Plus getting time at the workbench is never terribly easy. 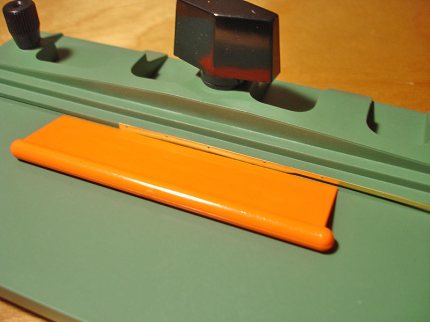 Bending the side sill.

The first thing I did was remove the photo-etched side sills from their fret and bend them into the correct shape using my Mission Models Etchmate 3c. Because these are notched sills the underside needs to be folded over at each end (makes an “L” shape). Folding PE with the etchmate is pretty straightforward. Once the part is positioned, you lock it in place and use the plastic folding blade to make the bend.

The fully formed side sill.

Once the sills were folded, I drilled out holes for the stanchions using a .021 bit and added the PE emergency fuel cut offs to each sill. 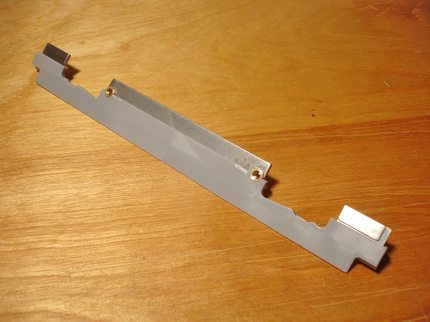 Frame half with weights installed.

Setting the PE aside, I moved on to the frame. I cleaned each half using a needle file, and a few emery boards of varying grit. I also drilled two sets of holes at either end to accomodate ditch light wiring. Once the plastic was clean enough, I installed the weights using straight barge to one of the halves. I then threaded .008 wire (to pull the ditch light hookups) through the holes I drilled.

The frame halves are now glued together.

There was a bit of play around the weights, so after carefully test-fitting the second half of the frame, I secured them both with clamps and brushed on Plastruct Plastic Weld. Since I did this at 3am after having been at work for 9 hours, I naturally forgot to add the bolsters, something I didn’t discover until the cement had become bulletproof. Luckily though, I found that by trimming the tabs on each bolster, I was able to push them into place on the frame where they fit pretty snuggly, I lined them up, applied some plastic weld and all was well in the world again.

The fuel tank top and bottom sections clamped while the adhesive sets.

The fuel tank is a pretty easy assembly. The parts were in excellent condition, so no sanding was necessary. After securing the weight with straight Barge, I clamped the two halves together and ran a bead of Plastic Weld around the joint. When this had hardened I sanded the seam off the sides using Testors Sanding Films (good stuff). For the tank ends, I laid a piece of sanding film on my workbench and slid the end of the tank back and forth across it so as to keep everything square.

One assembled, the fuel tank is quite heavy, and very sturdy. I held it up to an old Athearn BB frame, and there is simply nothing to compare. I’m still waiting for the PE top and end plates to arrive. Once they’re attached I’ll add details from the Cannon & Co. Fuel Tank Detail set. 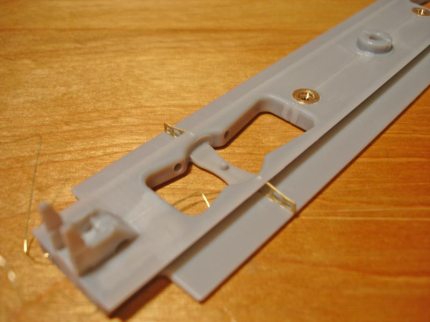 The last thing I did was to attach the jack pad supports, these are small PE parts that slide into slots on the frame rail. The fit was very tight on this unit and required a good deal of sanding and filing of both the plastic frame and PE part. Ultimately though each support went on beautifully.

The finished frame with all four jack pad inserts installed.

That’s pretty much it for now. I need to get the detail bundle I ordered before I can attach the sills, and then of course there will be all those other parts to attach. In the meantime I’m going to assemble the SD module. I won’t post anything about it here as the assembly is exactly the same, once the detail bundle arrives I’ll continue with this topic.