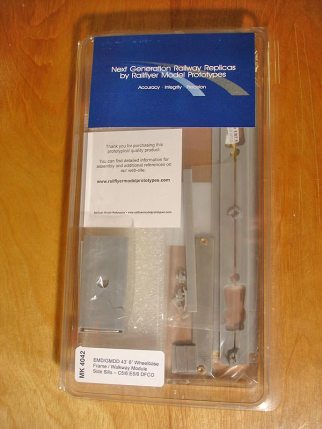 Since he was going to be in Massachusetts anyway for the ARS Railroad Hobby Show (see my previous post), Christopher Howard of Railflyer Model Prototypes was kind enough to bring the walkway modules I ordered from him. What you see above is essentially what you get when you order a frame and fuel tank bundle. This one has the 43’6″ wheelbase that is correct for the SD40-2, SD38-2 and a few others. I’ll be building it up as BN 6780. I also ordered a GP frame, but I haven’t made any definite plans on what I’ll do with it yet.

The main component in the kit is the frame, which is plastic and comes in two halves. It has scale frame rails running the entire length of the locomotive and prototypically correct draft gear at either end. There are cavities molded into the frame halves to allow for weights to be inserted. Though the frame looks a little fragile, it is quite rigid and become extremely strong once it is assembled with the weights in place.

I think this is called the walkway blower duct… whatever its name is, it creates the raised walkway on the conductors side

The walkway duct that runs along the conductors side is molded as a separate part, you can’t tell in the photo, but is has extremely fine notches on the bottom edge, exactly like the prototype. 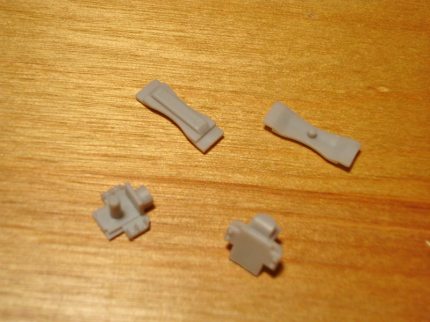 The bolsters and draft gear.

The bolsters are also molded as separate pieces with little tabs on the ends that fit nicely into small cavities on either half of the frame. There is a raised bump on top running the length of each bolster which makes them quite rigid. The covers for the draft gear have all applicable bolt and brace detail and press fit tightly into the draft gear boxes on the frame. They don’t need to be glued, so couplers can be swapped in and out without a lot of fuss.

The side sills and bolster extensions are very thin photo-etched brass that needs to be bent to shape. The bends on the sills are very long and narrow, but Christopher showed me how to bend them at the Amherst show last weekend, and it isn’t difficult provided you use a bending tool, like the Mission Models Etch-Mate 3c. Stanchion holes are marked on the back and need to be drilled out prior to attaching the sills to the frame. Holes are included for a few different stanchion placing schemes which is very useful, though I’ll need to be careful not to drill the wrong ones.

For just a set of stainless steel weights, these are pretty impressive. The main weight sits in the center of the frame, between the trucks and has two mounting points which stick up through the plastic and will be used to mount components above the deck. The two smaller weights go on either end and have a “T” shaped channel scribed into them to allow ditch light wires to be routed into the shell. Before you glue the two frame halves together just thread some small wire through, then once you’re ready to add ditch lights the wire can be used to pull the LED hook-ups into the shell. Each of these weights fits into the frame precisely with little or no free play. 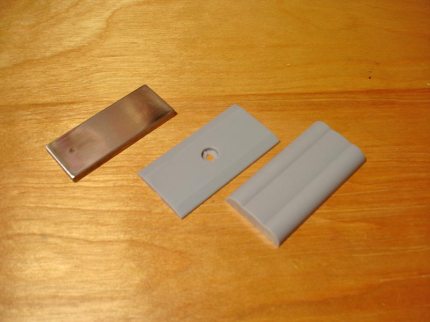 The fuel tank comes in three pieces a plastic top and bottom and a stainless steel weight that fits inside. The contouring on the fuel tank is exact, and the top is keyed so that it always goes on the frame straight. The way the fuel tanks are designed, some of the smaller capacity ones can even be mounted farther forward, or back (depending on the prototype) without having to make any changes to the kit. The weight is a little more loose fitting than the frame weights, and will need to be well secured with some Barge or epoxy before the tank is assembled.

The fuel tank comes with photo-etched top and end plates that simulate the correct lip at the ends and raised area on the top. Notches are supplied in the correct areas to allow fuel fillers to be installed. I’m actually going to need to get a new top plate for my unit as it had four fuel fillers (two at each end) as opposed to the more standard 2 fillers at one end, which is what this top plate is designed for.

An overall schematic showing, basically, how everything fits together

There are no instructions included with the kit, though a PDF with the first few steps can be downloaded here.  Once you see everything though, it’s pretty simple to figure out how to assemble it.

I found that the pieces were pretty clean with few part lines or draft angles. Christopher also de-sprues them, which is helpful as it saves the rest of us from damaging some of the narrower surfaces. Some clean up is needed, especially on the frame, but that is to be expected. Overall, I’m extremely happy with how this kit turned out, and I’m looking forward to a few quiet mornings spent assembling everything. It’ll be nice to simply build a model and not have to hack, cut, or otherwise modify anything to make this it prototypical.